One night when watching TV, I witnessed the devastation of the disaster in Haiti.  I was so bothered by it that I wanted to be of some help to all the victims. I decided to run a benefit dance with our group, Classic Groove, and a prominent DJ and my very good friend, Eddie K. All the members of Classic Groove and DJ Eddie K donated their services, and we worked with the American Red Cross for the benefit. We received donations from local businesses and restaurants, and ran a raffle. The benefit was a huge success and we raised a considerable amount of money for helping the victims of the earthquake in Haiti. 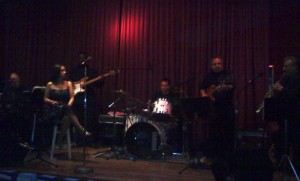 If the activity on the dance floor wasn’t already an indication, you must know that everyone wanted to know where we found “that amazing band”. I strongly endorse you and you can count on us to recommend you to any of our friends, many of which have already seen you now as they plan their
weddings.
Can’t thank you enough!

I just wanted to thank you so very much for sharing your talents with us on our wedding day. I can’t say enough about your professionalism and talents. You were there from beginning to end and you were just so wonderful to work with. You learned new songs for us, checked in with us regularly and you are all-around above and beyond my expectations. You even traveled to Maine. You made our wedding day a truly special and fun occasion and we cannot thank you enough.

Classic Groove delights audiences of all ages with their entertaining renditions of jazz and contemporary standards. The combined talent of band leader Steve Tashjian (woodwinds), Kevin Magarian (guitar), Steve Labonte (drums), and Ashley Alexander (vocals) ensure a memorable evening for any music lover. Whether performing favorite songs such as Van Morrison – Mondance or improvising Babajanyan – Chqnag Yeraz, Classic Groove demonstrates how worldly and wide ranging their musical repertoire is. Their incredible musicianship and professionalism not only makes Classic Groove an wonderful band to listen to, but also a pleasure to work with.

My name is Steve Bowman. About a year ago, my wife & I were enjoying a romantic Valentine’s Day dinner @ a quaint Italian restaurant, Tony Pilla’s @ the Holiday Inn in Woburn, Ma. We were aware that there would be music but when the band started to play, their sound punctuated how beautiful & melodic the night was. My wife & I commented on how refreshing it was to listen to a live band (with horns) who knew how to play notes perfectly without any distortion or excess volume. We both remarked about how if we were ever to have a wedding reception, this is the band that should provide the soundtrack.
Flash-forward about a little less than a year on the day of our wedding reception: Since the night began, I knew that my experience with Classic Groove was going to be memorable. As my wife & I floated across the floor(she floated, I flipped)while accompanied in perfect synch by the breath-taking vocals of their lead singer Vickie, who romanced the audience(and us)with a passionate medley of Shania Twain’s” Still the One”& then seamlessly transitioned into a duet of Bill Medley & Jennifer Werner’s classic” I’ve had the time of my life” electrifying the crowd, accompanied by the sultry horn section of the multi-faceted band leader Steve Tashjian & the outrageous trills(to match his personality)of keyboard player “Face.” The guitar & bass players provided the foundation for this sensational orchestra.
Although the complex, unique arrangement of the song for the first dance should have been difficult to follow, Vickie ignited the crowd with her tambourine or with her charismatic interactions, dancing along with us like she was reunited relative, or seducing the audience (especially the guys) with her hypnotic gaze & sexy falsetto, she charmed everyone in attendance.
The only draw back to the night was that it ended too quickly. But not before the show-stopping closing number “Feels like home” by Randy Newman. The band gathered everyone in a singing, swaying circle as Vickie serenaded my wife & I in a musical embrace almost as caressing as our own that ended in a deafening ovation.
Classic Groove felt more like family than a band. And I consider my relationship with Steve and everyone a friendship more than business. My wife & I are planning to see the band again this Valentine’s Day just like we saw them last year. And I recommend that everyone SEE THIS BAND NOW; While we’re still fortunate enough to see them intimately. (Although Vickie may have to take out a restraining order against some of the guys.)

I’m writing this letter to highly recommend Steve Tashjian and his band, Classic Groove. We were incredibly lucky to come across Classic Groove online when searching for bands to play our wedding in Freeport, Maine. At first, I was concerned that the drive to Maine from Boston would be too much. But the band was game and they stayed late despite having to drive all the way back to Boston that night. There are several things about that night and the weeks leading up to it that still stand out to me and would make me hire Classic Groove again without hesitating. We frequently talk about just having that party again since it was so fun and Classic Groove would have to be part of it!

Leading up to the wedding Steve and I were in frequent contact. He was professional and experienced in addressing specific requests we had for the reception. My wife and I wanted to dance to Al Green’s, “Let’s stay together,” which was not on Classic Groove’s playlist, but they learned it for the event and it was perfect. The day of the wedding, the band was early, as we requested, and were total pros in terms of getting set up discreetly and sounding amazing, despite playing outside in a tent on the coast. Even when we had 20 minutes of rain mid-reception, there was no concerns raised and the show went on.

Steve had a great sense of what the crowd would want to hear. We had gone over different genres we liked and some specific songs before the event and we were incredibly happy with the selection of music they played. My wife made one specific request that they not play country music and Steve called me specifically to ask if that included Shania Twain. This was towards the end of our planning and my wife was already stressed out, so instead of bringing it up I just told Steve, “no country!” to spare my wife another decision. Mid-way through the reception, a guest came up to us and asked, “is it okay if the band plays Shania Twain’s, “Feel like a woman?” We both laughed out loud and said yes, of course. They played it and the dance floor went nuts, mostly with our mothers’ friends. We loved that Steve stuck to our request to not play country in the moment, but also that his instincts for what would go over with the crowd were right on. And that they could play it without having rehearsed!

Everyone in the band was individually talented and you could tell they were professionals who loved to play. They were clearly having a great time performing and didn’t want the party to end either. The dance floor had been packed for the last hour of the night and we were able to goad them into three extra songs, the last being the Isley Brothers classic, “Shout.” They nailed
it and I can still hear Steve telling us, “it’s too dahk!” in his Boston accent as we begged for more. “It’s too dahk” has become a saying amongst my friends to indicate a good night we don’t want to end. We would hire Classic Groove again without hesitation.